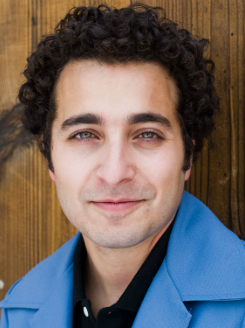 A ten-year veteran of the New York comedy scene, Seena got his start in stand-up as a college student. Since then, he has performed all over the country. In 2014, he was a guest host for nearly a dozen episodes of Take Part Live, a daily news show on Pivot TV that has a cable subscriber base of 40 million people. On the show, which he co-hosted with Meghan McCain, Baratunde Thurston, and Jacob Soboroff, Seena interviewed notables like Kermit the Frog, Reza Aslan, and Jay Rogers, the creator of the first 3D printed car. Seena also produces and stars in a dance show which he learns the world’s dance forms by immersing himself in different cultures and trying to win the approval of their respective dance experts. Seena’s weekly podcast, The Brighter Side, is hardcore self-help that attempts to put a positive spin on subjects like depression, rage and jealousy. Guests have included Saman Arbabi, P Funk keyboardist Danny Bedrosian, Michael Che, and Henry Zebrowski. It is available on iTunes, where it is frequently in the top 200.
@SeenaJon