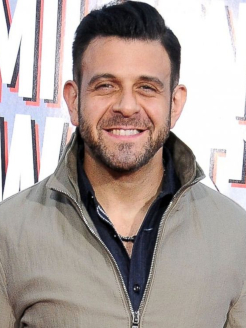 Adam Richman grew up in the food Mecca of New York City and began his love affair with food early on, sampling all of the diverse culinary specialties The Big Apple had to offer. From samosas to sushi, even at a young age, Adam had a desire to taste it all. In 2008, Adam began hosting “Man v Food” for the Travel Channel, which quickly became their highest rated show. With “Man v Food Nation”, “Adam Richman’s Best Sandwich in America” and “Fandemonium” Adam not only hosted but co-Executive Produced. His next show on Travel Channel, Man Finds Food, in which he stars and produces, will premiere April 1, 2015. In 2014 he hosted NBC’s new food competition show “Food Fighters,” which delivered the biggest regularly scheduled week-one to week-two gain in it’s demographic for any new series on the Big 4 networks in several years. The second season will premiere in 2015. Adam’s first book, “America the Edible” (Rodale Publishing), hit stands November 9, 2010 and his second book “Straight-Up Tasty” (Clarkson Potter), will be on stands May 12, 2015. Adam is a board member of the Armed Services Foundation and in 2009 and 2012 he won the CableFax award for Best Host. Aside from TV, Adam has acted in numerous theater productions in NY and a variety of TV shows.
@AdamRichman