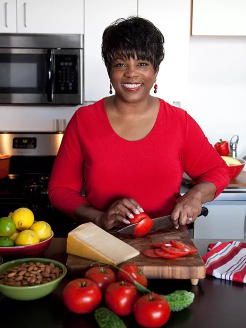 Angela Shelf Medearis is THE KITCHEN DIVA! She’s has been a regular guest chef and recipe segment creator on the DR. OZ, FOOD NETWORK, and the TODAY show. Medearis is the author of seven cookbooks including THE KITCHEN DIVA’S DIABETIC COOKBOOK; THE NEW AFRICAN-AMERICAN KITCHEN, and THE ETHNIC VEGETARIAN, among many others, as well as 100 award-winning books for children with more than 12-million copies in 7-different languages world-wide. THE KITCHEN DIVA! culinary history, recipe, and lifestyle column appears in Hearst King-Features newspapers and is distributed to 1300 newspapers in the U.S. and Canada with around 1-million readers.