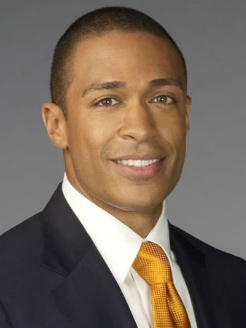 [ABC News Anchor]
T. J. Holmes is an ABC News anchor/correspondent. Joining ABC in December of 2014, he reports for all the network’s broadcasts and platforms. Primarily, Holmes contributes daily to “Good Morning America,” the most-watched network morning news show. His experience, personality and unique storytelling were a good fit to GMA’s blend of breaking news, in-depth reporting, and family-focused fun. In his 17-year journalism career, Holmes has reported around the country and the world on major news events, from the poaching crisis in South Africa and the Olympics in Athens and Rio, to presidential elections and political conventions.
Turning Down CNN Show for BET