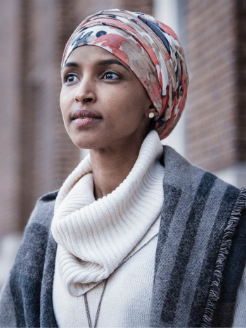 [MN-5 House Candidate]
Born in Somalia, Ilhan and her family fled the country’s civil war when she was eight-years-old. They lived in a refugee camp in Kenya for four years before coming to the United States, eventually settling in the Cedar-Riverside neighborhood of Minneapolis in 1997. In 2016, Ilhan became the first Somali-American, Muslim legislator in the United States. With the help of her committed campaign team, they increased voter turnout by 37%. She was elected to the Minnesota House of Representatives in District 60B, where she’s lived for the past 20 years and where she and her husband Ahmed are raising their three children.
Running for Office