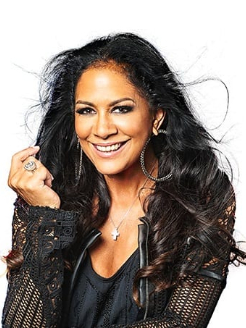 Born into a musical family, Sheila Escovedo (Sheila E.) has been driven by an inner rhythm her entire life. As a young girl, she was immersed in the diverse music scenes of the Bay Area—influenced and inspired by her percussionist father Pete Escovedo; musical uncles Coke Escovedo, Alejandro Escovedo, Mario Escovedo, and Javier Escovedo; and godfather Tito Puente. Starting out, Sheila E. owned the stage as a drummer and percussionist. But her career took an exciting turn when she met Prince backstage after a gig. The singer-songwriter revealed he had been following her career for some time, and the two quickly became friends. Their friendship eventually led to Sheila E. lending her vocals on Prince’s song “Erotic City”—a move that prompted her to launch her own solo singing career. Having been influenced by so many different genres of music over the years, as a singer, Sheila E. nails a variety of styles. From Latin, to jazz, to R&B, Sheila pours her heart and soul into every song. Sheila has had an evolutionary music career. Her sound changes with the era and her life.
@SheilaEDrummer