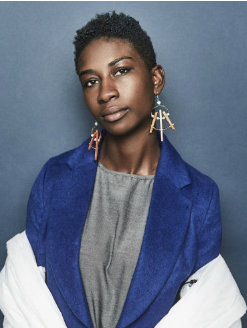 [Filmmaker / Activist]
Sabaah Folayan is an activist and storyteller born and raised in South Central LA. As an advocate at Rikers Island, Folayan interviewed incarcerated people about their experiences with trauma. She later helped organize The Millions March, one of the largest marches for racial justice in New York history, in response to the non-indictment of the police officer who choked Eric Garner to death. Folayan entered the world of storytelling through theater, attending the Lee Strasberg Institute of Theatre and Film as a teenager, and performing as a member of the Black Theater Ensemble while a pre-med student at Columbia University. In September 2014, she went to Ferguson with cinematographer Lucas Alvarado-Farrar to learn the truth behind the dramatic scenes playing out on the news. Hearing the stories from the community inspired her to embark on her directorial debut Whose Streets?, landing her a coveted spot on Filmmaker Magazine’s annual “25 New Faces of Independent Film” along with Co-Director Damon Davis. Folayan recently directed an episode of Glamour Magazine + The Girl Project’s Get Schooled web series presented by Maybelline. She is a 2015 Firelight Media Producers Lab Fellow, 2016 Chicken & Egg Accelerator Lab Fellow, and 2016 Sundance Institute Documentary Edit and Story Lab Fellow.
Documenting Ferguson