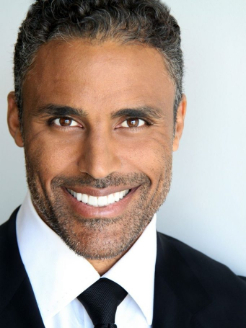 Born in Toronto, Rick Fox moved to the Bahamas when he was very young. His father is Afro-Bahamian, and his mother, who is Canadian, is of Italian and Scottish descent. Rick went to Warsaw Indiana high school as an exchange student and played basketball there. A complaint was filed about his eligibility and it was ruled one of his earlier years in the Bahamas was equivalent to a year of high school. As a result, he was banned from playing his senior year. To keep himself sharp and in playing shape, he still practiced with the team every day. Majored in radio, television, and motion picture sciences and played college basketball at UNC, where he left as the all-time school steals leader and games played leader. Upon graduating, he was selected 24th overall in the NBA Draft by the Boston Celtics. After several seasons with the Celtics, he signed with the Los Angeles Lakers partly due to its proximity to Hollywood and his interest in acting. While with the Lakers, he helped them win an NBA Championship as a versatile role-player.
@RickFox