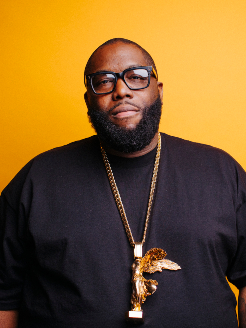 Killer Mike is a rapper, songwriter, actor, and activist. He is the founder of Grind Time Official Records, which he launched through SMC and Fontana Distribution. Mike made his debut on “Snappin’ and Trappin'” from OutKast’s 2000 LP Stankonia, and later appeared on the Grammy-winning song “The Whole World” from their greatest hits album Big Boi and Dre Present…Outkast. He has since released five full-length albums as a solo artist. In December 2008, Mike signed to fellow Atlanta-based rapper T.I.’s Grand Hustle Records. In 2012, he released R.A.P. Music, produced entirely by American rapper and producer El-P. Killer Mike and El-P subsequently formed a duo in 2013, branding themselves Run the Jewels; the duo was signed to Fool’s Gold Records and released their self-titled debut in June of that year.
@KillerMike