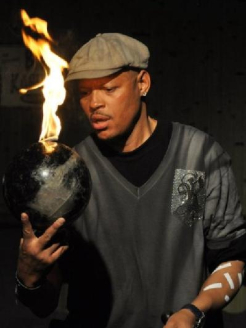 If ever there was a comedian/ magician to be seen, it is Kevin Lee. Kevin’s unique combination of comedy, magic and juggling leaves audiences both in awe and in stitches. Lee, has appeared on all of the national television stations on shows such as “Showtime at the Apollo”, HBO’s “Def Comedy Jam”, and Jamie Foxx’s “Uptown Comedy Club”, to name a few. Lee was also voted “Washington DC’s Funniest Comedian” by Washingtonian Magazine.
@KevinLee102