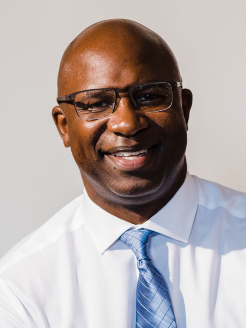 Jamaal was born and raised in New York City. He spent his early years in public housing and later in rent-controlled apartments. He didn’t have much growing up, but his mother provided him all that he needed: love, a stable family, and a sense of community. Jamaal now lives in Yonkers with his wife and three kids, and he works as the founding principal of one of thebest public middle schools in the city. After seeing the failures in our education system, Jamaal started Cornerstone Academy for Social Action (CASA). Located in the Baychester neighborhood of the Bronx, CASA is an innovative public school with a strong emphasis on student voice, holistic education, cultural awareness, and love. Through his work in education, he has seen firsthand how low-income families are locked out of opportunity by a system that’s rigged for the wealthy and privileged few. Through his work as an advocate and a Principal, he has seen the results of inadequate housing, homelessness, mental health, the racist immigration system, the school to prison pipeline, food deserts, and trauma filled environments.
@JamaalBowmanNY