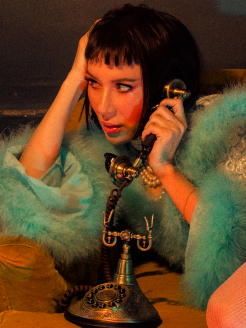 Hung Yung Terrarist’s music hails from the most famous drug park in Los Angeles, MacArthur Park. She grew up in the cult depicted in the Netflix documentary “Holy Hell.” In 2002, she turned down a record deal from Clifford Antone (mentor to Stevie Ray Vaughan). In 2007, she managed to turn down the half a million dollar record deal that went to Amy Winehouse. She speaks 7 languages, and raps in 3 on her latest release, including French and Dothraki, the fictitious language from the hit series “Game of Thrones.” The self-titled certified organic OG “Hung Yung Terrarist” album was crafted on an MPC 3000 by beat-boi Darryl Swann in collaboration with K-Embry. Extremely lit, with music by Devante, this underground classic is an homage to old school Hip Hop.
@IamHungYung