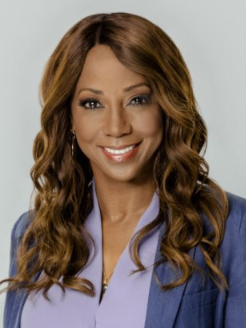 Holly Robinson Peete is an actress and singer. She is known for her roles as Judy Hoffs on the Fox TV police drama 21 Jump Street, Vanessa Russell on the ABC sitcom Hangin’ with Mr. Cooper, and Dr. Malena Ellis on the NBC/WB sitcom For Your Love. She also served as one of the original co-hosts of the CBS daytime talk show The Talk. After graduating from high school, Peete entered Sarah Lawrence College in New York. She majored in Psychology and French. After she graduated in 1986, she considered attending graduate school and perhaps working in languages for the U.S. State Department. However, she decided to give an acting career a chance. Within a short time, Peete found roles on a television series and in two films.
@HollyRPeete