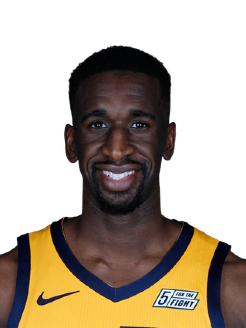 Ekpe Udoh played his first two years of college basketball at Michigan before transferring to Baylor in 2009. In his only season for the Bears, he averaged 13.9 points, 9.8 rebounds and 3.7 blocks per game and was named to the All-Big 12 Defensive Team. He was also recognized as an honorable mention All-American by the Associated Press. The Golden State Warriors selected Udoh with the No. 6 overall pick in the 2010 NBA Draft. Udoh spent five seasons playing for the Warriors, Bucks and Clippers before he moved to Turkey to play for EuroLeague powerhouse Fenerbahce from 2015–17. He was named the EuroLeague Final Four MVP after he led his club to the league championship in his second season. Udoh returned to the NBA when he signed with the Jazz in July 2017. Throughout his professional career, Udoh has been active in the community. He founded Ekpe’s Book Club and leads a discussion at the group’s monthly gathering, and he also runs an urban farm in his hometown of Edmund, Oklahoma.
@EkpeUdoh