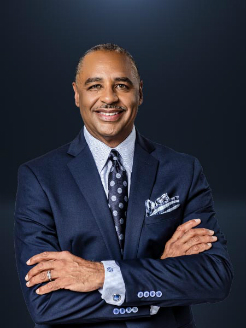 Ed Gordon is an award winning journalist with over 30 years in the television news industry. Known for his no-nonsense interview style and his ability to land exclusive interviews with top headline makers, Gordon has covered stories for BET, Dateline, NPR and 60 Minutes Wednesday, among countless others. Some of his more notable interviews include an exclusive with Janet Jackson discussing her secret marriage, one-on-one interviews with Presidents Obama and Clinton, and the highly anticipated first interview with OJ Simpson following his murder acquittal. Widely respected for his work, Gordon has received widespread praise and recognition including an Emmy Award, an NAACP Image Award, and the prestigious Journalist of the Year award from the National Association of Black Journalists.
@EdLGordon