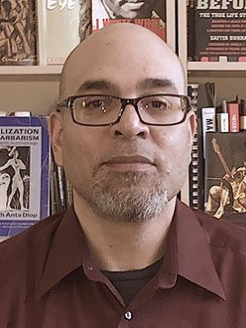 Jared A. Ball is an Associate Professor of Communication Studies at Morgan State University in Baltimore, MD where his research interests include the interaction between colonialism, mass media theory and history, as well as the development of underground journalism and cultural expression as mechanisms of social movements and political organization. Ball is the producer and host of the “Super Funky Soul Power Hour” which airs Fridays 11a-12p (EST) on Washington, DC’s WPFW 89.3 FM Pacifica Radio and is also the founder and producer of FreeMix Radio: The Original Mixtape Radio Show, an emancipatory journalistic political mixtape about which he published his first book, I MiX What I Like: A MiXtape Manifesto (AK Press, 2011). Ball is also co-editor of A Lie of Reinvention: Correcting Manning Marable’s Malcolm X (Black Classic Press, 2012). He can be found online at imixwhatilike.org.
@IMixWhatILike