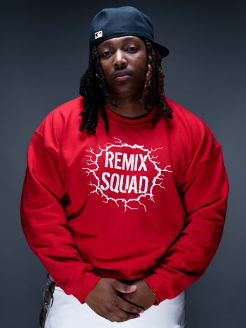 DJ Suede began making music at age 12, working on beats and remixes in his spare time while eventually making his way through college. Shortly after college, he began to be noticed on a larger level for his Vine account, eventually achieving a viral post when he remixed the default ringtone for iPhone 6 and shared it across his various social media platforms. This started a theme for Suede, sharing remixes of familiar sounds or pop culture references and watching his fan base multiply with each new viral remix he’d release. Another massive wave of viral fame came in the fall of 2016 when Suede chopped up impassioned sermon/song “Hold My Mule” by gospel singer Shirley Caesar, reconfiguring it with a relentless trap beat as “U Name It.” The song was widely shared so quickly that it spawned its own viral challenge, with fans and celebrities remixing the remix into infinity. Though Suede and his management were in touch with Caesar about clearing the sample for use, no agreement was reached before the song was released and Caesar threatened legal action. Early 2017 found Suede with yet another massive success, when his remix of the popular Internet meme “Cash Me Outside” broke through the Billboard Top 100 chart at number 88. Suede took audio from footage of a troubled teenager on the Dr. Phil show clapping back at the audience, dicing up her catch phrase “Cash (catch) me outside, how bow dah (how about that)?” in rhythm with a grinding and infectiously catchy trap beat.
@RemixGodSuede