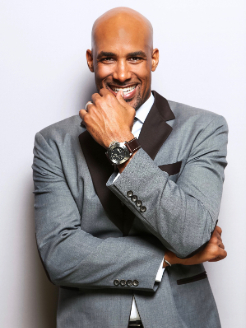 Boris Frederic Cecil Tay-Natey Ofuatey-Kodjoe, better known as Boris Kodjoe, is a German actor known for his roles as Jason in the 2000 film Love & Basketball (2000), and the sports-courier agent Damon Carter on the Showtime drama series Soul Food (2000). Kodjoe was born in Vienna, Austria, the son of Ursula, a German psychologist of partially Jewish descent, and Eric Kodjoe, a Ghanaian physician who is of the Nzema people. He was named after Russian poet and writer Boris Pasternak. Kodjoe’s great-grandmother was Jewish and died in the Holocaust; his maternal grandmother survived the war in hiding. Kodjoe is fluent in German, English, and French, and speaks some Spanish.
@BorisKodjoe